The 20-year-old DocPoint – Helsinki Documentary Film Festival will be organized online due to Covid-restrictions. The 71 films in programme will be screened from Friday 29th Jan until Sunday 7th Feb at Festhome – and for the first time, everywhere in Finland! DocPoint’s Daily Picks will help navigate through the possibly overwhelming programme of the festival. 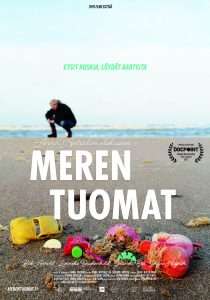 The Opening Film of the 20th DocPoint is Anna Antsalo’s  WALK THE TIDELINE. The film follows today’s beachcombers – treasure hunters and beach cleaners, and tells stories about ourselves through the trash we think we have left behind. FISH EYE is a sombre meditation of commercial fishing that looks at the human and ecological side of the trade. THE OTHER ONE is skillful and enigmatic portrait of an elderly Chilean man whose life by the sea in almost total isolation is accompanied by only one conflicting partner. In ONCE UPON A TIME IN VENEZUELA a small Venezuelan village, sinking underwater, serves as a metaphor for the country itself, permeated by corruption and blight. PURPLE SEA is an unforgettable piece of experimental cinematic art about hundreds of refugees on a sinking boat. Sundance favourite ACASA, MY HOME follows a family, evicted from their home of twenty years in the wilds of the Bucharest wetlands after the city comes knocking with plans for a public park.

Welcome to join to our DocPoint club on Facebook to meet and greet the film makers and festival goers!

All DocPoint films are now available at Festhome except for GUNDA, which will be available from Saturday 30th January 12:00 noon.